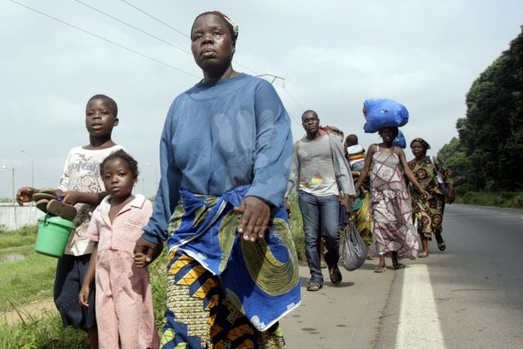 The Silence of Abobo

I was there in November 2010, in Abobo, when, after ten years of spectacularly successful avoidance strategies by the president of Ivory Coast, Laurent Gbagbo finally ceded to international pressure and held democratic elections, under the watchful eye of independent monitors appointed by the UN.

His rival, Alassane Ouattara, a brilliant former economist, who had served under the hugely popular and successful Felix Houphouet Boigny during Ivory Coast’s glory years, when the country enjoyed massive stability and prosperity as West Africa’s flagship of economic growth, took the public vote.

My husband  and I were enjoying an annual visit to his family and staying in the poverty stricken ghetto which is PK18, in the suburb of Abobo to the North of the country’s commercial capital, Abidjan. The family, fifteen strong, lives in a community built around a collection of courtyards, largely without sanitation, by the side of the railway, which runs within yards of their homes, where children run and play, risking life and limb every day.

In November, the heat was unbearable. Following the election, on the 28th, we waited for an announcement, glued to the fuzzy television screen in a neighbour’s house, along with twenty or so others. There was no announcement. Not then; not for many days. In the meantime, tensions mounted and , for the first time in my life, I became familiar with the sound of  gunfire outside my home. We were subject to a military curfew and I’m not ashamed to admit that there were nights when, in the heavy heat of the darkness, I clung to my husband and sobbed, longing for the noise to stop. Abobo is a community whose members voted heavily for the opposition, remembering Ouattara’s fairness and commitment to social equality from earlier days, both before and after the devastating civil war which blew the country apart amid mass atrocities and economic disaster in 2002. In the days before the election, men and women dressed in civilian clothes, came to PK 18 with blocks of chalk, marking the doors of our homes. They told us that the government was preparing to issue free mosquito nets for every occupant. In my naivety, I thanked God. I’m a little embarrassed by that now. The marks, we now believe, signified something else, something much more sinister.

I left Abidjan on the 1st December, leaving my husband behind. My job as a social worker prevents me from taking long holidays, so he habitually stays on in Abidjan with his family. We are very used to saying goodbye, but this time was different.  “Why the tears, Madame?”, I was asked by airport staff in the crushing queue to check in, side by side with camera crews, white businessmen and anybody else who had the inclination and the wherewithal to leave. I could hardly speak to respond that I didn’t know whether I would see my husband or our family again. My flight was the last to leave for Europe. The day after I left, Mr Gbagbo sealed the borders and closed the airport.

There followed three weeks of terror and unbearable suspense, waiting first for the airport to reopen and then, while my husband suffered virtual lockdown in PK18, praying that he would be able to find a driver prepared to risk his life to bring him to the airport. When I arrived home I was able to access some news via the internet and learned that Gbagbo had actually intercepted the results announcement, his henchmen tearing the document up before members of the international Press. He went on, in the face of international condemnation, to announce his own victory.

On 16th December thousands of the brave took to the streets of Abidjan. Mr Ouattara had been virtually imprisoned in the Golf Hotel in Abidjan since the elections, surrounded by UN tanks and servicemen and women, who in turn were surrounded by the menacing mobs of civilian and military supporters of the incumbent president. The people thought to take back some control, to make the world take notice of the state of Ivory Coast. Government tanks fired on the innocent and much blood was spilled on the main streets of Abidjan. Gbagbo declared that rebels were hiding in Abobo and there began an onslaught against the communities in these stricken areas which continued for four months.

My husband called me several times during one day while I was working. At times I could barely hear what he was saying, his breathless, frank terror, accompanied by an unceasing barrage of gunfire and explosions outside the house a torment while I sat at my desk in safety, my colleagues around me, tears pouring down my face. I knew why he was calling so often. He thought he was going to die and he wanted to say goodbye.

Thanks to the bravery and resourcefulness of friends and neighbours, he made it to the airport  in a dramatic dash and arrived home just in time for Christmas. At that time we were still catching the occasional news report on the television or in the British press. Gbagbo’s ambassador in London was no longer recognised by the British Government, and throughout Europe similar measures were taken. Economic sanctions were placed on Ivory Coast by the EU and by ECOWAS (the Economic Community of West Africa States). The pressure was mounting from all sides for Mr Gbagbo to stand down and accept the results of his own elections. His response took the form of oppositional defiance. And, with the emergence of civil unrest in other African and Arabic states, whose people were also rising up to demand the departure of despotic and tyrannical administrations, the desperate position of the people of Ivory Coast fell somewhat beneath the radar.

Some 70,000 Ivorians, Maliens and Burkinabés fled to neighbouring Liberia, and an estimated 20,000 of the 1.5 million population of Abobo,  walked to towns further to the north, seeking respite. They confirmed what our family told us, that dead bodies lay where they fell in the streets. In a one week alone we lost two close friends to devastating attacks from rocket launchers, another to cholera. In those days, the UN made several attempts to reach the beleaguered community, only to be turned away by members of the “Jeunes Patriotes” organisation. These young men were recruited and radicalized by the Minister for Youth, Charles Blé Goudé, and incited to ethnically led hatred, urged to commit atrocities in the name of racial purity, and even, it is suggested, supplied with the arms to undertake their sinister duties by the government itself. Roadblocks surrounded the community and it’s now accepted that reports of innocent people being burned alive simply for being in the wrong place at the wrong time were a hideous reality.

The main hospitals closed their doors to anybody who didn’t support Gbagbo;  easily identifiable by their names and addresses; and the local clinic in PK 18 stood abandoned by terrified health workers. Electricity supplies were  cut off to large areas of the country, notably in traditionally Pro-Ouattara districts. Gbagbo blamed technical problems for the outages, a claim which has been emphatically denied by the electricity company, whose executives bravely issued a statement asserting that armed men entered the power plant and demanded the supply be cut off by order of the government.  Those who were young and strong left. Our family remained, prevented by my mother in law’s ill health and the sheer size of the family group, from embarking on the  rigorous and dangerous journey to the nearby town of Anyama. The youngest of my brothers in law was ten years old. Born during the civil war, he was living in the shadow of terror and hunger again.  He clung to his mother’s side and sobbed constantly.

On 3rd March 2011, large groups of women, loyal to Ouattara, took to the streets of Abidjan, to protest peacefully and to demand Gbagbo’s departure. My sister in law was there in Abobo, where they gathered to make their own protest, unarmed and painfully optimistic that in this country where women are venerated and treated with respect their voices would be allowed if not exactly heard. They were wrong. The tanks of Gbagbo’s military thundered through the town centre and opened fire on women, young and old, whose only defence was to run. And run they did, leaving their sandals lying poignantly in small piles across the street. At least six - some say eight -  couldn’t run fast enough and  their bodies  joined the others, left in the street  where they used to do their shopping. I’ve seen the video posted on YouTube, a strange and macabre media that  became one of the scant  recourses to news and information available to us in those bleak days. A woman lies covered by branches, her skull literally opened up like a grotesque blooming flower, amid denials and accusations from the administration of deceitful montage, of self- inflicted misery and suffering, and, for the population, a frustrated rage against a world that just keeps closing its eyes.

I called the International Committee of the Red Cross, based in Abidjan. The kind gentleman, who I know only as Michel, immediately returned my call. He told me that the Red Cross has been trying to reach PK18 for ten days, but they can’t get past the road blocks. He was anxious not to raise artificial hope of an evacuation any time soon. Even if, he explained, they could reach our family, the dangers inherent in attempting to remove them, navigating the lawless and  murderous roadblocks manned by Blé Goudé’s civilian pawns could prove the greater risk to life and limb.  They couldn’t justify the risks to personnel or those to the evacuees. He did promise to call our family, to offer them the number of a Catholic priest who was trying to rescue people and take them by minibus to Anyama, where the refugees were being offered shelter in the Catholic Mission and the Central Mosque. But there’s cholera in Anyama. In the absence of practical aid, he took our number and promised to check on our family, phone connections allowing, and stay in touch. I was comforted to know that we weren’t alone.

Ivory Coast is a beautiful, silent country where  thousands died in the name of a tyrannical despot, illegally in power, where, for five months, the constant threat of genocide and mass atrocities overshadowed communities and individuals, where the UN itself came under attack from the military forces loyal to the incumbent president, and where charitable organisations encountered the same hopelessness as individuals. There was no media interest in Britain, aside from an odd paragraph and a brief mention on the news from time to time. There was no outcry, no proclamations of intent from our government to defend the weak and protect the innocent from oppression, brutality and tyranny. There is no oil to speak of in Ivory Coast, although the country produces the majority of the world’s cocoa. And so, it would seem, the world turns a weary eye away, focusing instead on a different conflict where the residual benefits stand more likely to profit us in our comfortable, Western democracies, where values and ethics appear to be inextricably linked with commerce and economy.  Are these deaths and this suffering somehow of a lesser consequence than others in the great scheme of all things international? We are all eye witnesses in this age of internet communications and we should all speak out. Let’s break the silence of Abobo.  If we don’t, no one will ever hear.

Click here to go back to Vivienne's poetry and Bio. 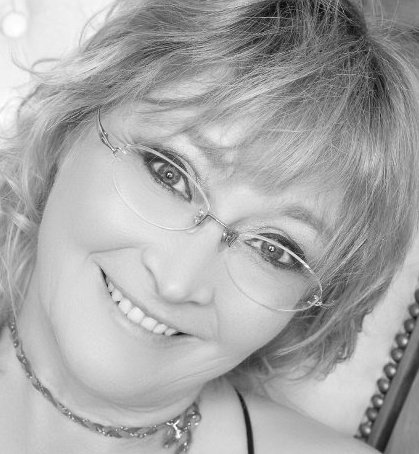