It's not often I introduce writer's work on The Curiosity Cabinet, but this lady and her story touched me so much I feel I need to. If you read only one article this week, please read THIS - which she wrote about her experiences.

Vivienne has also written a series of poems which you may find below, entitled, PAYS MORT. She says they were "written after my experiences in Ivory Coast in late 2010, when a failed election brought my husband's country to civil war, and my family was subject to a terrifying ordeal, exposed to a horrifying genocidal onslaught while the world quietly looked the other way. I understand that you have some limits in terms of the number of submissions allowed and I was somewhat torn between these poems and an article I wrote on the same subject. I have sent all four - please do have a look and let me know which, if any, you would consider fit for publication.

Anxious faces, tear stained cheeks
Guns and palm trees, tanks and beads
Wrong companions, home and hearts
A thousand strong, and all apart
Displaced, disjointed, disseminate
Going nowhere, left too late
Behind a township burns at last
The charred reminders of the blast
We walk exhausted all bereft
Nothing of our lives is left

The bold dictator smiles and lies
While this, his country, slowly dies
And in our fear and pain we bleed
The terror of the life we leave
Till there is nothing left to lose
There’s nothing here that we would choose
But the hot and shimmering road ahead
Is all between ourselves and death
So winding on we walk the day
Bright colours showing us our way
The one before, the one behind
Onwards always, always blind.

M’ammed, little boy, the day of Eid
Held the horns of this year’s sheep
Our father bought, a splendid beast
A sacrifice, to make the feast
I have a photo here to see
My little brother smiled at me
In sunshine, happy times, with pride,
Young shoulders, held back, shining eyes
Before the sound, the distant gun
Disturbed the peace of M’ammed’s fun
His eyes flicked nervous to the side
Checked for a place that he could hide
Checked where our mother sat to see
If he should stay at home or flee
But the menace so far stayed away
M’ammed held the sheep that day
But the day came that M’ammed’s sheep
Tied by the legs died by the tree
As everybody knew it would
And M’ammed watched
And saw the blood

Then when I left him there alone
He wept as I flew away home
I was already far when the noise and heat
Exploded into  PK dix huit
And M’ammed, little boy, curled like a ball
And sobbed to hear the quarter fall
Watching faces all round him break
In fear like his, made his world shake
My brother smiles in my fretful sleep
Holding the horns of last year’s sheep
And there at home, his waking nights
Are filled with terrifying sights
And there’s no food throughout the day
No water, no light, nowhere to play
The day will come when M’ammed’s life
Plays out in peace and sunny times
As we all know it must
And M’ammed soon will learn to trust

M'Ammed, Vivienne's youngest Brother-in-law, who was the inspiration for this poem

It turns on a heartbeat
In the naked sun
Decision made
The wrong way home
A step too long
An eye off the ball
False confidence born
Of all the days before
The days that never ended like this
When tables and tyres burned elsewhere
Not here.
Not under these trees where women sit
And pound bananas, and sway babies asleep
Where young brothers play fight
And sisters pick corn rows and thread
Against their laps much smaller heads.
No singing voices here today,
Fear keeps them all behind the door.
It’s a dead land in Cote d’Ivoire,
It’s a day of pays mort.
Only harsh cries from the men
Who ask for a name, and it turns on a word.
There’s a half moment to hesitate,
Then a conscious gift in voice.
The name is out there, pride, betrayal,
It’s a choice but no choice.
Silence or lies condemn the soul,
To speak invites a world of blows
_They know.
A crack and smashing into bones
And a fall that seals the mold.
Boots pounding, tearing skin and eyes,
And the red, dry dust of the road
Begins  to melt darker now and churned
By writhing limbs and snapped back neck.
One eye towards the stillness turns
The other, sightless, hangs on swollen flesh.
Nobody’s coming here to help.
It’s a dead land in Cote d’Ivoire
The day before, today and more.
It turns on just a name. 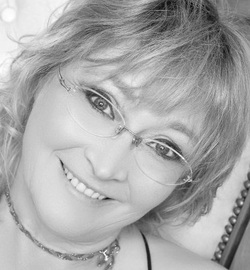 Vivienne Dembélé lives with her African husband in the North West of England, and works as a social worker in a Youth Offending Team. She used to know a man who, at the close of his evening meal every night would settle back on his chair, stretch and say, with a degree of resignation, "Well, if that was me dinner, I've 'ad it"

She always felt that the worst thing that could ever happen to her was to find herself, in the last days, settling back in her chair and saying, "Well, if that was me life, I've 'ad it." So she always takes the road more interesting - and as a result, she finds herself often stressed, sometimes confused, generally happy, occasionally distraught and, every once in a while,terrified. But this mother of four has survived domestic violence, rape, bereavement and civil war. She has learned and grown; always a believer, her exploration of faith has ultimately brought her to Islam and her greatest joys are those which arise from that simplest yet most complex of human conditions ... love.