Why I love "The truth about Cats and Dogs" 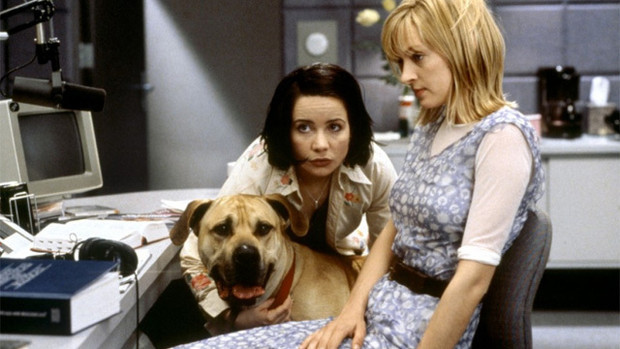 For such a vague and complex topic, ‘Love’ is just about the most popular subject in fiction. Romantic Comedies have been a mainstay of Hollywood’s output since the 1930s and by the 90s, the genre was box office gold. The commercial and critical successes of films such as “Pretty Woman” and “Four Weddings And A Funeral” gave producers templates from which to build successful relationship dramas and, although the results were often formulaic and predictable, the occasional gem stands out for its charm and intelligence. Amongst the deluge of ‘rom-coms’ came a film that quietly passed under the radar of most cinema goers in 1997 but proved that a quirky, character driven romance could still work.

Based loosely on “Cyrano De Bergerac” in plot, “The Truth About Cats And Dogs” draws on the great tradition of screwball comedies with a couple unable to get together through a series of comic misunderstandings. Abbie (Janeane Garofalo) is an eloquent, quick witted vet on a talk-radio show who agrees to go on a blind date with caller Brian (Ben Chaplin), a photographer whose life is spent focussed on visual images. Abbie is so sensitive about her appearance (even her publicity shots at the radio station don’t feature her face) that she bottles out of the date and, when Brian turns up unannounced at the radio station, she gets her glamorous friend to pretend to be her.

Interestingly the film’s star, Uma Thurman, is not the main protagonist. Her role as Noelle is to act as the barrier between the central couple and the conduit through which they communicate. Intelligent and confident on the airwaves, Abbie can comfortably flirt with Brian over the radio and telephone but, self conscious about her physical form, she sends the gorgeous yet not very bright Noelle on dates in her stead. The resulting farce may not be the most cerebral but, as both women in their different guises fall for Brian, the romantic triangle is fascinating. We know that Abbie’s worry about her appearance is unfair (she is, in fact, stunningly pretty) and can only imagine the past bullying she has received to make her so self-conscious. We know that Noelle’s boyfriend is a loser and when she justifies him by saying “Gotta have a boyfriend don’t ya?” it says more about society’s expectations of her as an attractive woman than as a person. Like a lost little boy we feel for Brian despite his clumsiness and even though he horribly ignores Abbie in favour of Noelle. As the respective relationships grow and then crumble our hearts break as the three are driven apart and left alone.

What makes this film stand out ahead of other romantic comedies of the era is that it relies on character rather than unrealistic situations and gross out humour. There is no outlandish plot contrivance (even if the romantic triangle does spiral to rather bizarre levels) and the narrative is believable, honest and absorbing. It is a very human film, the central figures are all endearing, and for the short period when lust takes over, the raunchiness is subtle and even romantic. Between them, the leads bring a combination of awkwardness, shyness and gullibility that means the audience are won over by all three.

Is “Cats and Dogs” a guilty pleasure, something to be ashamed of? Certainly not. It is by no means technically brilliant, there are a million plot holes you could drive a bus through (Brian may be a dumb Brit but is he really so stupid that he can’t tell the difference in voices) and the titular “Cats and Dogs” only really bookend the film. What it is though is sweet, not in a saccharine, Disney way but in an enchanting one. It’s a film that makes you curl up in a ball and feel good about life, love and relationships. Whether you feel let down by your appearance, wish you knew more than you do, struggle with the whole dating game or just want to see a giant dog on roller skates “The Truth About Cats And Dogs” will have something to say to you.