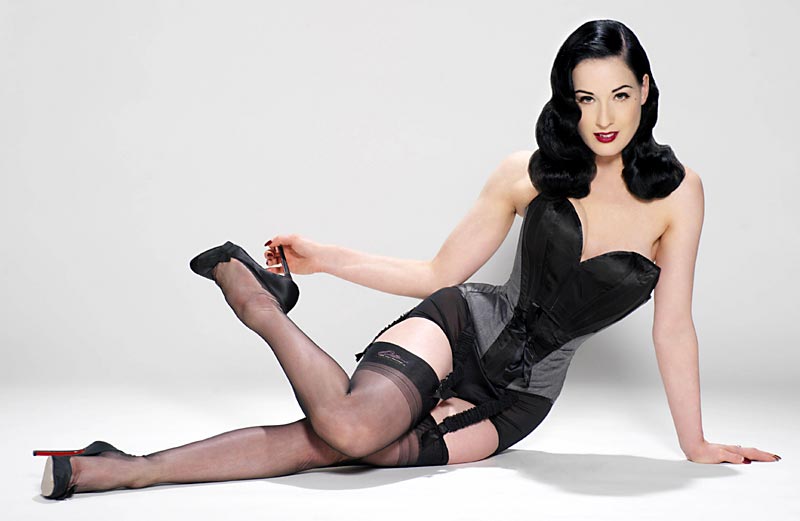 If you read my first article, then you can acknowledge these key points that I shall outline for those who didn't get a chance to read it. My article was a basic introduction into my need to be different, my inhibitions and anti-conformity with fashion as well as Dita Von Teese being a massive influence on my life. For the sequel, I have decided to discuss the next chapter in my life.

So after “googling” every page of Dita, and analysing her eyebrows, her make up and hair I began to look at her interests. She had stated she liked the word “stripper”, to me this diction had some seriously negative connotations and I found myself confused. So I watched her video again, for some reason, I had separated Strip Tease and Stripper from each other, when really they are like cousins. The difference between stripping and the Art of the Striptease is probably the amount of glitter and rhinestones! (-when taking it down to the ultimate basics). I soon learnt that there was nothing wrong with being a stripper, a porn star, or a page three model, I learnt to appreciate their form. I wouldn't do it personally, but that isn't the point, the point is to love the woman for being who she is and being brave enough to accept who she is.

This appreciation of true self relates back to my first article, where I found I lacked an identity, and I found it through styling, and appearance. What a person does is a part of who they are, whether it be their occupation, their hobby, or what they watch on Television. I believe society is quick to make judgement, and discriminate, after all they say it’s easier to criticise than to give a compliment. –Everyone has imperfections, and I believe it’s these imperfections which make us beautiful, which actually make us perfect as well as making a person an original! I have been offended in the past by name calling, I have been degraded and segregated amongst other things, but deep down all I utterly wished was to be appreciated for the true me.

Criticism whether it is a snide remark or witty banter can seriously affect a person. People starve themselves, abuse themselves and chose a path of self-loathing, when this could have been prevented by someone keeping their mouth shut, and thinking for a moment. Think. Thought processes are complicated, and this is why people find it easier to synthesise a harsh critique of a person, if the flaw is there before them, then the person simply has to point it out, especially if the flaw physical. However, if the person has beautiful qualities but they are more abstract, it can be sometimes be hard to decipher them and then produce it into a compliment. It is due to my Mother and Burlesque that I try to see the best in people. Every “body” is a person, that person has emotions, and anyone’s words can hurt. Take the example of the anorexic girl, it may be considered cliché yet it’s so true and still occurs. She was called “fat” she was regarded to as “ugly” and so she starves herself, maybe even turns to bulimia, and then reduces herself to a mental illness. That woman was a little girl too, she liked the same things as you, she was as innocent as you, but for one reason or another she was “chosen” and she got bullied. Is this fair?

Similar things have occurred in my life, though I won’t bore you with details. –The point I am trying to propose is to just think. Just wait a minute, let your neurons work, and if you don’t have a nice comment to add then don’t even breathe it, just little it wither away like a distant memory. Burlesque reassured me and sustained my body and mental confidence, as well as directed me to a way of life. It taught me to appreciate body form as you will not find two bodies alike in Burlesque, I can guarantee it. It also gives people (including) me something to aspire to. You have all kinds of stars and they all achieve greatness, but it will not be because of their body, it will be because they own their body and they have worked on their ‘thing’. For example Dita Von Teese is slim, but hour glass shaped and produces beautiful classical glamour, but if you look at Dirty Martini, she is also an hourglass shape but she has a fuller figure, and focuses on her naughty, frisky and risqué performances. Both dancers are beautiful but so very different. Diversity is natural, change can be natural too, but do not force it!

Body gratitude is the key to all success, you must own your body, know how to work it, and then other people will subconsciously feel the vibe. If you sit in a place whether be a classroom or the pub, and think “I hate my body”, this will send of a bad vibe, you’ll sit awkwardly, with shoulders rolled forward and a spine that would make the Hunchback of Notre Dam jealous. Confidence oozes sensuality, and will attract other people. You will also need to smile more, even if you do not feel like smiling, if you smile for long enough you’ll trick your mind. -It’s the same with telling yourself “I am great! I am fabulous”, if you continue this, you will eventually believe it! –Don’t go shouting that one though!

To conclude, Burlesque is amazing, the performers are beautiful, and so are you! Go and look in the mirror and tell yourself you’re a stunning/handsome little thing five times! Learn to love your body, if you’re skinny, then work it to your advantage many girls would kill to be slim like you however if you have a fuller figure, you’re just as sexy, but you've got the curves so shimmy along together! Imagine if we all looked the same, we’d get bored! 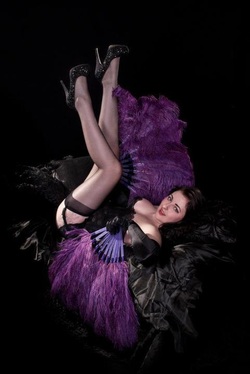 "Glamorous. Sensuous. Exotic.
Cerise is lithe, she's nubile and resistance is futile! Come and be enraptured by the dazzling form of a performer born! Try as you might you can't help but stare at the shimmering shape of Ms Cerise Derriere!"

Cerise is a young but confident Burlesque performer. Exuding sensuality and sexuality with her performances, Cerise likes to play with her audience. Cerise enjoys classic burlesque, to vintage songs from the 30-40's and even some 50's songs. Be enthralled and enticed by her captivating movement, but don't get too mesmerised...