Emily Jane Curtin & Michael Burrin bring to The Curiosity Cabinet, a short film about a man coming to terms with becoming a single father. Written & produced by Curtin, this moving and sometimes heartbreaking film is  directed by Burrin, it is brought to life with beautiful cinematography.

It's a truly modern twist on the whole idea of single parenting. He recieves pitying looks in the School yard from another Mother...an almost 'How will he cope without a woman' look. Most people will think of the Father running off without a thought about their child, but Curtin & Burrin manage to break down 21st Century stereotypes in 5 minutes and 8 seconds. 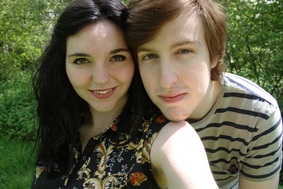 Emily-Jane Curtin is a self-proclaimed genius at scrabble and Michael Burrin dabbles in playing the guitar and trying to answer any question on university challenge. In the present, they both are currently trying to investigate who actually ate the cookie from the cookie jar. Oh, an on the side they make films; like this one called 'Father'.