The Watcher In The Woods

Modern clothes are the problem. The joys of living in the twenty-first century in the developed West are a huge factor in the lack of contact. You see, it’s the iron. It permeates everything and that’s bad for the wee folk.

I don’t know exactly when I figured it out, but that’s what seemed to make the difference.

I sat carefully on the edge of the wood, watching the small crescent moon move across the sky and just waited.

It had got to be a pain nowadays, constantly needing magnets on hand to deal with the clothing issue. Touching them to zips and eyelets and fasteners and buttons and rivets in case anything reacted. Why we had so much metal in our clothes these days really puzzled me – after all, wasn’t metal supposed to be rare and precious and valuable in this economic climate. Sure, just last month there’d been that story about the plaques being stolen off some war memorial because they were made of bronze. That was something no-one should be capable of, at least no-one with any kind of soul in their bodies. You had to honour your dead, especially the ones who had died in a conflict that many of them had probably thought was pointless and never wanted any part of in the first place.

Wars were stupid like that. They rolled up, gave big speeches about how it was all about King and Country, and God was on your side, and then forced you to join their army, or locked you up as a traitor. Then when they got you out in the trenches or whatever, forced you to go shoot at people you’d never met and knew nothing about and if you refused, shot you as a coward.

It must have been embarrassing for the government to have to apologise for shooting all those cowards, years later, and admit that some people were just a bit out of it and couldn’t actually fight. That didn’t stop them starting more stupid wars that nobody wanted and getting more people killed though – but I digress.

Clothes – that was it. I lost track of where I was up to there for a second. Clothes had too much iron in them. Back in the old days, before zippers and buttons and the suchlike, most clothes were made of wool or animal skins of one type or another and held together with sinews and beautifully carved bone toggles and leather straps.

Sure now, there was armour of various types that had metal all over it and buckles to hold it together and some idiots put buckles on their shoes just as decoration, but in the main clothes were not made of metal – at least not among normal folks,  real folks, solid working folks. The fops in the cities had long ago lost contact with the real world so they didn’t count anyway and the real world had, in many cases, lost interest in them.

That is why I am sitting here on the edge of a wood in a pair of elasticated tracksuit bottoms and several t-shirts, a woolly jumper and a sheepskin coat. I was thinking back to the old clothes idea and wondered if maybe the Amish get to see a lot of reality, being unburdened with a lot of metal as they must be. If I ever get to meet any I must ask them about it, but for now I just have to sit here and wait for the wee folk to show up.

I knew they’d be along soon and that maybe they wouldn’t want me to see them, but at least I wouldn’t have any metal on me to scare them off with. Not like last time when I’d worn my hiking boots and stayed out here all night and not seen a thing. I forgot about the lace holes being reinforced with the metal, you see, so I had a wasted night. There was no way they were going to come out and talk to me while I had metal holes on my boots, was there? Common sense that – obviously.

There were so many metal parts. The rivets on your Levis for instance, what were they made of? Brass? In this day and age of expensive metals, does anyone believe they’d really use brass rivets when iron is so much cheaper? The wee folk hate iron – everybody knows that, so no point coming up here in your fancy jeans. Money too – that’s not made of silver, or gold, or copper any more – that could have all kinds of iron and alloys in it, but it didn’t react to my magnets.

Carrying magnets everywhere was a pain, but necessary if I was ever to get to meet them and as for keys – total bunch of cheapskates nowadays. My old back door lock had a fine brass key and three copies of it for the family and a spare, then when they had to replace the back door after the wind and rain had warped it and started it to rot, the new one had steel keys. Steel! I ask you, what kind of world do we live in when decent locks come with steel keys? I bet the lock itself was some kind of steel or alloy too, not like the old one – that was craftsmanship that was.

Well, I’d thought of everything tonight – now I just had to wait for them to come. I’m sitting here on the edge of the wood, in the pale moonlight leaning against an old oak tree and there’s a hawthorn hedge at the side of the path near me with rowan leaning right over it.

This is the place alright, and no metal here, they’ll be along soon.

You’ll see, they’ll be along soon… 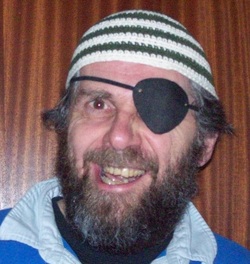 A devoted husband and father of five (including our very own Evie Lola from Issue One), he has just celebrated his 25th wedding anniversary!
Back in his working days he programmed bots for video games, but these days he mostly plays the games instead of programming them.
With a great love of the English Language, he has been writing for many years, often staying up until the wee hours to get his thoughts onto paper, and raising all of his children to understand that "when Daddy is wearing the RED headphones, he is not to be disturbed!"