It was an awful night. I only came out because I had a suspicion he wasn’t being as monogamous as he claimed.

Now here I was, squeezed tightly into a booth with my husband and his friends. The girl to my right had huge breasts, an extremely low cut top and was constantly sucking on a cigarette. She sprayed perfume heavily and the result was a mixture of cigarette and au de slag.

To my left a boy finished off a bottle of vodka, his weighty body sliding onto me as spirits and gravity took toll.

I stared across the table at my husband; he shrugged, his eyes glazed with alcohol.

“Scuse me” I muttered, struggling to leave the table.
“What the hell is her problem” Cigarette Girl said.

My shoulders stiffened but I bit my tongue.

The bar was directly across the room. To get to it I had to negotiate the crowd on the dance floor.

Sweating, stinking, moving bodies acted like human mire, I struggled to make my way through. I eyed a girl gyrating on a man’s crotch, her skirt half way up her ass.

I had nearly reached the bar when a hand grabbed my shoulder. Involuntarily I was forced to spin around and face the perpetrator. Anger bubbled, if it showed the man paid no attention.

“Dance?” He asked, flashing unbelievably white teeth. I had time to take in dimples and gorgeous eyes before being pulled into the mass of moving bodies.

The music was dangerous. A heavy bass line had sex laced through every chord. Notes slithered around my limbs, into my skin and pounded through my bones.

I found myself dancing with this dark handsome stranger.

With every beat my hips, spine and forearms took on their own energy. My heart re-aligned to the tempo, another instinct took over. Primal. Heated.

His face was intense, his hands pulled me closer, his lips found mine and my body pressed against his willingly as we kissed.

My brain was white noise, all I could feel was a fire burning up through my feet to my chest.

A desire for more.

I felt the softness of his hair, took in his scent, hands touching muscles through his shirt.

Elation hit me, a sweet happiness, a blackness inside me was lifted, I was sure his heart was beating like mine with the music, certain he wanted me as much as I wanted him.

A commercial song began to play.  I was struck by lightening clarity and pushed myself away looking into surprised eyes. Drenched in icy horror I pointed to the ring on my finger, feeling speechless and shocked at my own betrayal.

He nodded slowly, frowning as he left. I felt as though I had betrayed him too. The feeling lasted a split second as I realised I had been in full view of the table; I spun around and saw my husband’s friends laughing and joking, oblivious. My husband and Cigarette Girl were missing.

Dread bounced in my stomach. The next few scenes played out like images captured on camera.

Dazed I found my way to the front entrance of the club.

Stepping outside I felt cool air on my face. A few people stood in groups on the street.

I described my husband to the bouncer.

He pointed towards the takeaways.

My feet hit the pavement heavily with each step.

I passed a backstreet.

I heard a low moan.

Heart in my mouth I moved forwards.

Pressed against the wall was Cigarette Girl, my husband’s naked butt between her legs. My brain kicked in.

“What the hell do you think you are doing?”.

They fell apart, my husband scrambling to pull his trousers up; she calmly pulled her skirt down and began to light a cigarette.

I shook my head, stalked off the backstreet, and walked.

Eventually I reached a quieter area of town. I sat down on the floor, resting my back against a bank window.

I looked up, surprised to see the man from the dance floor walking towards me.

He sat next to me and didn’t say another word.

Quietly I took my ring off my finger and put it on the ground in front of me.

“I guess we’re just as bad as each other.” I mumbled.

“Just bad for each other.” 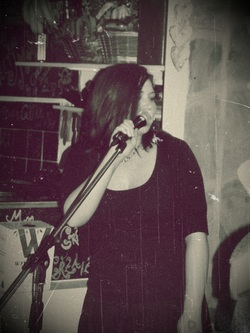 I'm 24 years old and been writing for the pleasure of it ever since I can remember. That's all you need to know!